How I started programming

My three kids are now 5, 7 and 9 years old. Meanwhile, they all have their own rooms which, for the two older school kids, contain desks with a Raspberry Pi 400 on them. They use it to look up pictures of Pokemon, to listen music and to play minetest, supertuxkart or the secret of monkey island :) Well, they also used for joining classes remotely during lockdown things.

My primary intention was, to make the computer accessible so - whenever their interest arouses - they could play around and discover on their own. Today I think that the number of possibilities may be way too high to just sit down and start with something specific. 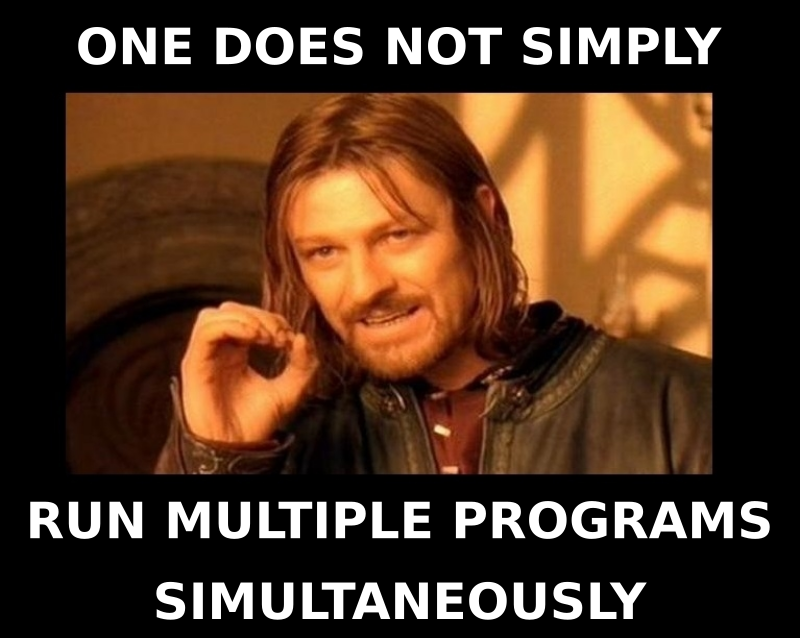 I actually consider to run the Pis in some kind of kiosk mode, to reduce distraction. I remember that, on the first computer I used, we ran one program at a time. If you decided to run another program, you would turn off the computer, change the floppy and restart. Of course it's nice to have multiple things running at once on a computer, but to learn something new, I would argue that running one thing and only this one thing, might be best.

Thinking back when I was their age, it must have been the time when my father received an old Amstrad PCW (Joyce) from a friend, our first computer.

I was fascinated by that machine, I loved the green on black text and the different noises it made - especially the dot matrix printer noises :D My father used it for word processing and because that was all he needed, it was all he ever tried. I also loved editing text in locoscript (which was just awesome) and playing the few games that were available.

However, the Joyce came with a BASIC and with the Logo programming language. I had no idea what either of them was, nor had anyone in our family. So one day I grabbed the manuals (which luckily were in German) and started learning Logo and running the examples until I was able to draw my own little pictures. In a playful manner I learned the concepts of algorithms; of variables, loops and subroutines. 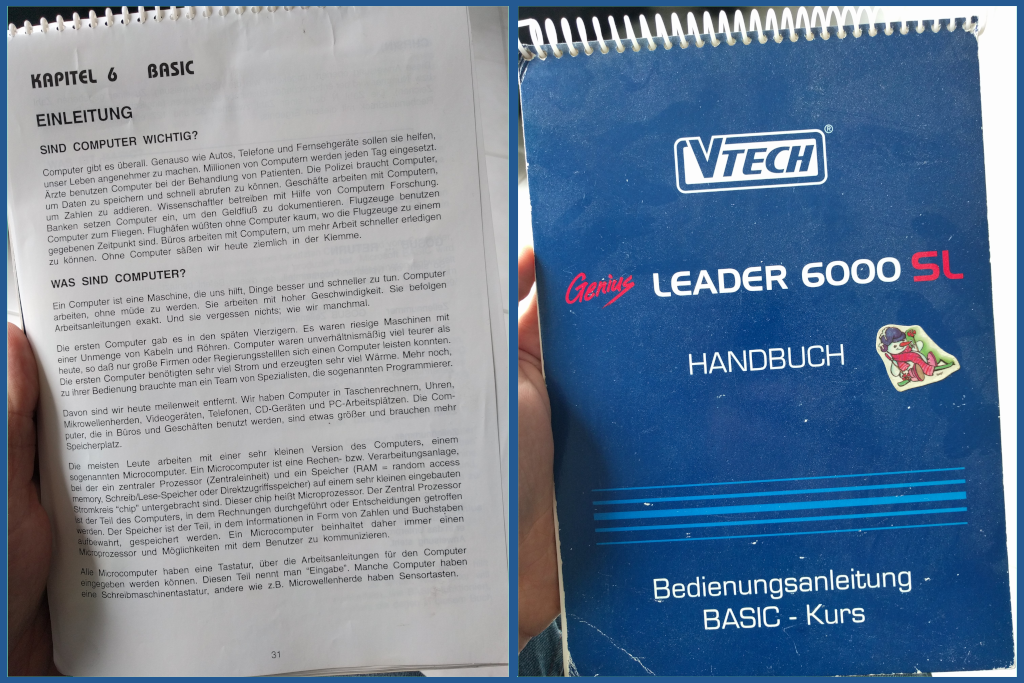 At that time, BASIC was still incomprehensible for me. This changed when my parents, which wanted to foster my interest but didn't quite know how, gifted me a VTech SL, an educational computer that could not really do much, but came with a BASIC and a manual that was actually appropriate for children and that I could follow along nicely. So I soon had plenty of those little programs that would ask you for your name or age and then make funny comments about that. Always, my main motivation to write code was to eventually develop a cool game. Good for me that some of my friends shared that interest and one in particular I considered a real programming wizard.

When I was young, LAN parties were the real thing. I saved money for a then cheap Medion PC - an Intel Pentium D with an NVidia RIVA TNT graphics card. The only condition my parents put upon me was, that I would have pass an official typewriter's course - "The computer is not just a toy, learn touch-typing so you can use it for work/school".

So you would carry over your midi tower and 17 inch CRT monitor and a box of cables to a friend's basement and forget about daytime and the rest of the world for one weekend over Duke Nukem 3D, Starcraft and Jedi Knight - Dark Forces 2. The friend at whom we met was two years older and first impressed me when we were missing the last BNC terminator to finalize or LAN connection (yes, that's when before the time of Ethernet, all PCs had to be hooked up in line, connected by a coaxial cable and cleanly terminated on both ends). So he grabbed an ohmmeter, measured the resistance the terminator had to have, found a fitting resistor in a drawer and bent it into shape to close our network connection.

He was regularly programming in Pascal and I was blown away when he showed us his self-written window manager/desktop environment. It could not do too much, but show files as icons which you could nicely customize in color, but to me it was magic. Together we installed Borland Pascal on my machine and he showed me how to use the built-in documentation system. However, my English skills at that time were simply not good enough to really make sense of that excellent documentation. So I couldn't wait for the computer science course in school to start.

Computer science. Awesome! I was so excited about it, that it hurt even more when we realized that it would be a complete disappointment. The first "computer science" course I had in school was nothing but a Microsoft Word/Excel/Powerpoint introduction, and not even a good one. Well, we endured and in the next year the teacher changed and so did the course. And that may have been the best class I've had, ever.

The new computer science teacher was also physics teacher and was not too famous with the kids. He had a quite nerdy 70s look which I appreciate today, but was inscrutable for us when we were young, and a funny name that translates to "beef". However, the topics he covered and the hands-on way he taught them were just great. Within two years we started with the basics of the Pascal programming language and the workings of computer algorithms with a Logo-like environment. After that we switched over to abstract data types (queues, lists, linked lists, trees etc.), computer architecture down to a level of "what does an ALU do, and how?", and finally we wrote our own assembly code to draw icons and images on the screen. That must have been in old unprotected mode, where you could just write into the video adapter memory directly, which was mapped into the PC's memory.

Soon enough we found us bumming instruction code lines from our assembly programs to find the most elegant and shortest solution to a problem, looking over each other's shoulders and admiring clever tricks. When I read Steven Levy's Hackers many years later, I perfectly remembered that feeling when reading about the first MIT hackers, hacking on the PDP-1.

We finished the course with a group project: We developed an idea for a 2D racing game we called "Geisterfahrer" (wrong-way driver) where the player had to dodge oncoming traffic. We identified the different tasks we had to do, planned what routines needed to be programmed and assigned teams. It didn't work out well, but hey, the concept was superb.

I hate to admit it, but back then in my school days, I didn't like the computer science course very much. I simply could not appreciate the value of these lessons; I was bored by abstract data types, didn't know what I would ever need computer architecture knowledge for and was a bad team player in our final programming task. Only when I was in college and studied physics and computer science, I realized just how good this school course has been. In two years at college we covered exactly the same topics going just as deep, but this time I was in a course with ~200 people instead of just 20.

I learned Java and C/C++ basics at college, and when I applied for a project to write my bachelor's thesis, I was looking for programming tasks in physics working groups; there were and still are plenty of them. I did the same when I started my master's thesis, this time programming in Java and C# (just because the syntax was similar but the performance was way better), and after that once again the same to find a PhD position - this time in a medical field. I started to learn Python with Mark Pilgrim's Dive Into Python, which was an excellent choice for me, because it gave plenty of examples and comparisons with other programming languages I already knew.

There's not much interesting to say from that era except one thing: In terms of programming, I was still a bad team player. The code I wrote was hard to maintain; I wrote it alone and I wrote it for me to work. I imagine the poor people coming to the working groups to continue my work had hard times. I simply never learned how to collaboratively develop software - this part was actually not covered in college.

This only changed when I learned about DGPLUG and the summertraining, where - as I read - people were taught what need be known to start contributing to Open Source projects. I've written about that project before and every summer I realize how much it has changed the way I work today for the better. And it is only now, that I feel like I almost know what I am doing, and why, when I write code.